Our Laser Procedures
Research Center of Excellence
Schedule a Consultation

Our Laser Procedures
Research Center of Excellence
Schedule a Consultation

Schedule a Consultation
Our Surgical Procedures
Center for Glaucoma Research 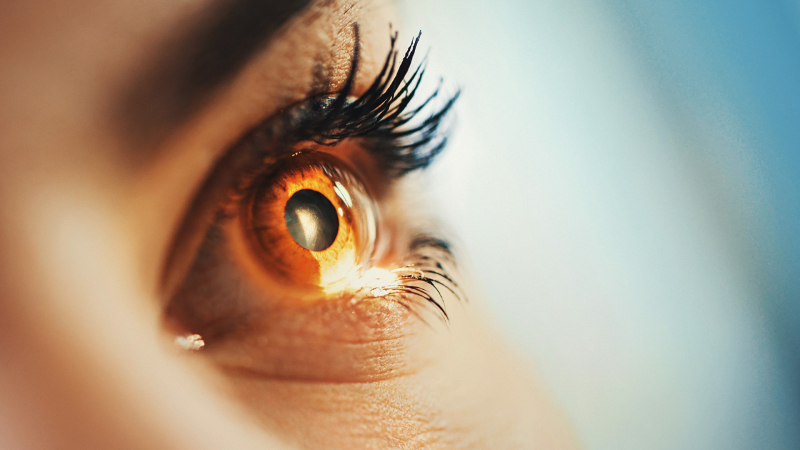 Our Laser Procedures
for Glaucoma

Our Laser Procedures for Glaucoma

In open angle glaucoma, Selective Laser Trabeculoplasty (SLT) is performed to help with intraocular pressure control. Most laser procedures are out-patient procedures performed in the glaucoma clinic. These are usually associated with minimal pain and have no need for restricted activity after the laser. Your doctor or technician will check the eye pressure approx 30 minutes to an hour after the procedure before you go home. You will be sent home with some anti-inflammatory eye drops and a post-operative appointment. 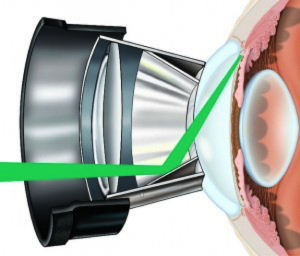 Selective Laser Trabeculoplasty (SLT) for glaucoma is a common procedure performed to lower intraocular pressure (IOP). SLT is an outpatient procedure used to selectively target the pigmented trabecular meshwork cells in the angle of the eye. The outflow of aqueous humor is then enhanced and the IOP is lowered.

The procedure takes about 5 minutes to perform. Prior to the procedure, a topical anesthetic drop is placed on the eye and a contact lens is placed on the eye. The laser applications are made through a microscope that looks similar to the one your doctor examines your eye with in the office. Once the laser is completed, you will have to wait for a period of time to have your eye pressure checked. Allow 2 hours for the entire procedure. You will need to use an anti-inflammatory drop in the eye for several days following the procedure.

Several postoperative visits will be scheduled to monitor your eye pressure. Expect several weeks before your doctor sees a lower pressure in the eye treated. Early results show that the laser may be repeated if necessary.

Benefits of the laser include no adverse events from added medications and the delay of a surgical procedure. Please feel free to discuss this laser or other procedures with your physician.

Micropulse Transscleral Cyclophotocoagulation (MP-TSCPC) is recommended for a variety of patients with glaucoma to reduce aqueous humor secretion by treating the cells that produce fluid (aqueous humor), thereby lowering intraocular pressure (IOP). In addition, there is also some evidence that MP-TSCPC helps to lower IOP by increasing aqueous outflow, potentially giving it two mechanisms of action. 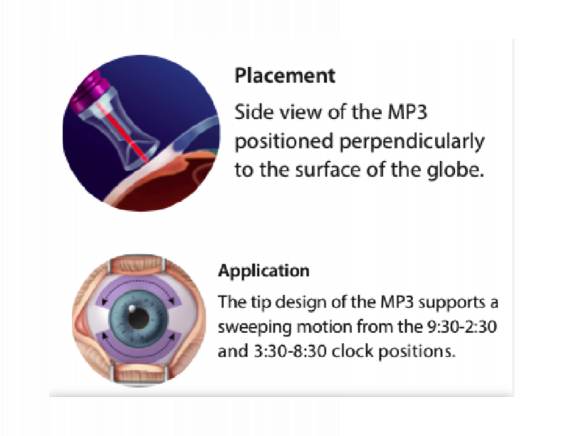 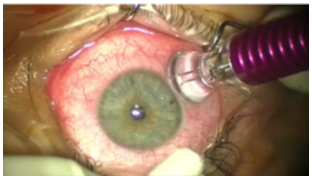 Why would MP-TSCPC be recommended for me?

MP-TSCPC is an outpatient procedure. The patient receives a peribulbar block (anesthesia around the eye) prior to the laser. The laser, performed by your ophthalmic surgeon, takes approximately 10-15 minutes and will require the use of postoperative drops to decrease inflammation in the eye. Most patients have minimal postoperative pain. The procedure may be combined with the injection of a pain killer (Chlorpromazine) behind the eyeball.

Since there are no incisions made into the eyeball there are usually no postoperative restrictions associated with the procedure. You will have a patch on the eye for the first 24 hours after the procedure and your doctor will want to see you the day following the procedure in the office to check your eye pressure.

MP-TSCPC may be repeated if the desired eye pressure is not achieved.

Diode Cyclophotocoagulation (CPC) is a procedure where the intraocular pressure is controlled by reducing the amount of intraocular fluid made within the eye. Aqueous humor is actively secreted by the ciliary processes. A diode laser is used to coagulate the ciliary processes with laser light. This procedure is usually performed in an operating room facility under anesthesia to make the procedure comfortable and safe. The laser is applied using a special probe inside your eye either with cataract surgery or by itself Endocyclophotocoagulation (ECP). Another way to treat the ciliary processes is to deliver the laser light through the wall of the eye using a special probe placed over the surface of the eye (CPC). This last procedure is usually recommended when the prognosis for vision is poor or if all other surgical options have been exhausted. 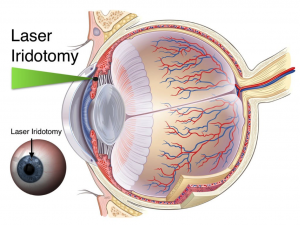 How do lasers work to treat glaucoma?

Lasers deliver a type of light energy. This type of light energy is similar to using a magnifying glass to harness the energy of the sun to burn a hole in a piece of paper on a sunny day. The magnifying glass needs to properly focus the light to create a hole in the paper. Likewise, if the laser is not aimed properly at the iris, there is no effect. In order to focus the laser, your eye doctor uses an instrument called a slit-lamp.

This is the same instrument which is used to routinely examine your eyes. Since this is actually a type of microscope, the laser energy can be focused with extreme accuracy.

Several types of lasers can be used to treat pupillary-block glaucoma. The use of the argon laser to create an iridotomy was accepted widely by 1980. Since then, another type of laser, the neodymium: YAG laser, also has proven to be safe and effective. Although there are some differences between these two types of lasers, the use of one or another is best left to your ophthalmologist.

How is laser iridotomy performed?

Before having an iridotomy, your ophthalmologist may place some different types of drops on your eye. The first drop, pilocarpine, will make your pupil smaller. This stretches and thins your iris, similar to stretching out the top surface of a drum. By doing this, it is easier for the laser to penetrate and make a hole in your iris. You may be asked to continue using this eye drop for a few days following the laser treatment. This medication may temporarily cause blurred vision (especially at night) and also may give you a brow-ache. 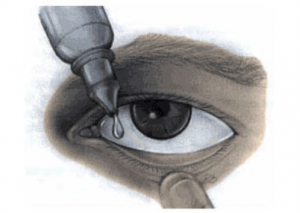 Anesthesia Eye Drops
The only kind of anesthesia required to perform a laser iridotomy is an eye drop. This is the same type of drop which your doctor places in your eye when the eye pressure is measured. With the eye drop, the laser surgery should be painless. You may see a bright light, like a photographer’s flash from a close distance. Also, you may feel a pinch-like sensation.

Your doctor will next place a special contact lens on your eye to focus the laser light upon the iris. This lens keeps your eyelids separated so that you do not blink during the treatment. This also reduces small eye movements so that you do not have to worry about your eye moving during the treatment. To protect the eye from being scratched by the contact lens, special jelly is placed on its surface. This jelly may remain on your eye for about 30 minutes, leading to blurred vision or a feeling of heaviness. 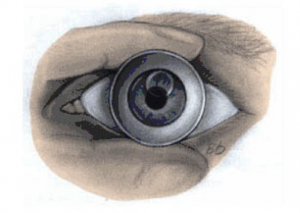 What to expect after an iridotomy.

After treatment, your doctor may ask you to stay for a few hours to check your eye pressure and insure that it has not increased.

When it is safe, you will be sent home and may be asked to use eye drops. Your ophthalmologist will explain their use and when you need to be examined again.

In general, there are no restrictions in activity following the laser treatment. You can return to your normal daily chores immediately. It is advisable to have someone drive you home from your doctor’s office. You can expect some redness of the eye, a sensitivity to light, and a scratchy sensation. All of these might last for a period of days. You also might expect a small headache later that day or night.

The chance of losing vision following a laser procedure is extremely small. The main risks of a laser iridotomy are that your iris might be difficult to penetrate, requiring more than one treatment session. The other risk is that the hole in your iris will close. This happens less than one-third of the time. Once the hole stays open for six weeks, it is unlikely that it will close in the future. In addition, you may still require medications, or other treatments to keep your eye pressure sufficiently low. This further treatment is necessary if there is damage to the trabecular meshwork prior to the iridotomy or if you also have one of the other types of glaucoma, in addition to the pupillary-block type.

Do not worry about the size of the hole in your iris. Neither you nor your friends will notice it. It is usually placed in a portion of the iris which is covered by your upper eyelid. The size of the iridotomy is only that of a pin head.

Remember that the creation of a laser iridotomy is both safe and effective. There are a few risks. The purpose of an iridotomy is to preserve your vision, not to improve it. 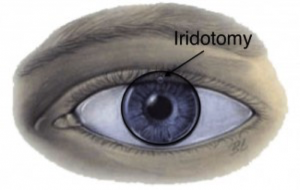 What is a Laser Iridotomy?

Closed-angle (of pupillary-block) glaucoma is one of many types of glaucoma. Often it can be cured through a procedure called an iridotomy. To better understand closed-angle glaucoma and its treatment, iridotomy, it is important to understand the different factors which determine eye pressure. In laser iridotomy, a small hole is placed in the iris (the colored portion of the eye). In most patients, the iridotomy is placed in the upper portion of the iris and cannot be seen under the upper eyelid.

What is Eye Pressure?

What is Eye Pressure?

Aqueous humor (the nourishing fluid within the front of the eye) leaves the eye through a tiny drain called the trabecular meshwork.

Aqueous humor leaves the eye through a tiny drain called the trabecular meshwork, which is located just in front of the iris.

In the normal eye, fluid passes between the iris and lens before leaving through the trabecular meshwork in the front of the eye.

In pupillary-block glaucoma, a type of closed-angle glaucoma, the flow of fluid between the iris and lens is blocked and the pressure builds in the eye. As it rises, the iris is pushed forward.

Although many people think of glaucoma as just one single disease, in fact there are many different forms of glaucoma. Differences depend upon where in the eye the blockage to the drainage occurs. Both the border between the iris and lens as well as the trabecular meshwork are areas where the flow of aqueous can be limited, leading to increased eye pressure. One type of glaucoma, pupillary-block glaucoma, occurs with the former. In this type of closed-angle glaucoma, the flow of fluid between the iris and lens is blocked. It is called pupillary-block glaucoma because the fluid is trapped behind the pupil.

As many as 10% of all glaucoma patients in the United States may have pupillary-block glaucoma. The blockage of fluid flow between the iris and lens can cause the pressure behind the iris to rise. As it rises, the iris is pushed forward. If it moves forward enough, the iris can cover trabecular meshwork like a rubber stopper in a drain. Sometimes a patient is unaware of the pupillary-block. However, the eye may become red. A patient also may experience headache or pain, blurred vision, and halos around lights. Rarely, there is nausea.

If there is sudden pupillary-block and if the eye is left untreated, permanent damage can occur which can lead to blindness.
The sooner the blockade of fluid flow between the border of the iris and lens is treated, the less damage occurs. Therefore, it is desirable to treat this disease as early as possible.

Ellex Tango
Tango’s dual-mode laser cavity allows us to move effortlessly between SLT and YAG modes, ensuring that we can treat patients across both modalities with maximum accuracy and optimal efficacy. Read about Ellex Tango here.